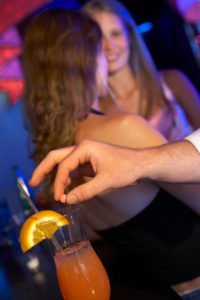 Teenagers and young adults should be aware of the issue of drink spiking. A recent UK survey in Cambridge nightclubs found that a third of students had experienced their drinks being spiked.
The majority of reported drink spiking incidents are not linked to any additional crime and are most likely to be the result of a prank, but drink spiking can be linked to sexual assault and robbery. Whatever the intent, drink spiking is illegal and people who spike drinks can be charged, fined or jailed.

How to help prevent drink spiking

It may not be possible to tell if a drink has been spiked by smelling it or tasting it. The substances used to spike drinks are often colourless and odourless. The symptoms of drink spiking can depend on many factors such as the substance or mix of substances used, the dose, their size and weight, and how much alcohol they have already consumed. Symptoms may include feeling drunk, woozy or drowsy; feeling drunker than expected; mental confusion; hallucinations; speech difficulties such as slurring; memory loss; loss of inhibitions; nausea and vomiting; seizures; loss of consciousness; an unusually long hangover; or a severe hangover when they had little or no alcohol to drink.